This sculpture was a special one Wayne worked on in 2017. He was chosen to be part of a project between 7 indigenous businesses to represent through the visual arts the strong relationship between France and Australia and their commitment to building and designing 12 submarines for the Royal Australian Navy

Wayne’s sculpture was one of the pieces chosen to be created, and now resides in the DCNS (the company that is building the new submarines) head office in Adelaide.

Created in Australian Stainless Steel, the sculpture stands at two metres high and embeds two large barracudas and two water lines crossing over representing the relationship between DCNS and the Department of Defence.

The twelve smaller barracudas showcase and represent how the French Navy's Barracuda class submarines will serve as the reference point for the design of Australia's Future Submarines.

The battery of barracuda are travelling in formation reflecting the Australian Defence Force.

The marine life and coral at the bottom embodies our home - Australia - the country our Defence force strive to protect. 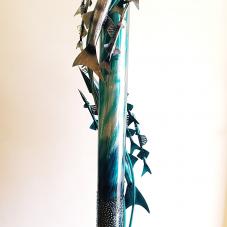 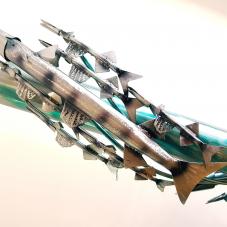 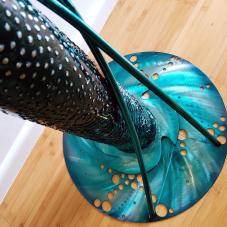 Recently I commissioned a steel artwork from Aboriginal Steel Art, that needed to be of cultural significance. It was to be presented to Aunty Lorraine McGee Sippel at the launch of my book 10 Hail Mary's,. that was held at Gleebooks, in Sydney. Wayne suggested the Murray Cod, as Aunty Lorraine is a Yorta Yorta woman, from the river based people of the central Murray region. Working to a very tight deadline Wayne produced a magnificent work of art, that had the audience gasping when it was presented to Aunty Lorraine. Thank you Wayne, I really appreciated you pulling out all stops to get this to me on time. I mention the Murray Cod and the artist who made it, every chance I get.
-- Kate Howarth
© Aboriginal Steel Art 2023. All Rights Reserved.